why travelhouseuk is famous amongst african community

Looking out for Cheap Flights to Africa ? The online website and their attractive cheap flight offers are numerous but the challenge is to avail it in a price that's really worth it. Travelhouseuk provides a comprehensive travel plan with a variety of packages to match your needs. Besides other continents of the world, more than 50% of our business and clientele in the UK is composed of great people hailing from Africa. Navigate through our website and social media channels to keep you updated about the cheap flight deals and vacation packages. Our top travel experts have also made a comprehensive travel guide of each country in Africa that is useful for regular as well as novel travellers. Book an airline of your choice that operate flights from UK to South Africa, Ethiopia, Nigeria, Morocco, Kenya, Senegal, Tanzania and many more on the list. Search and compare air fares to get your hands on the best price.

Africa is yet to see some remarkable development in air travel. However, there are leading airlines, indigenous to the African continent, which provide the much-needed flights to Africa. These airlines include EgyptAir, South African Airways, Royal Air Maroc and Ethiopian Airlines. These airlines are also used by citizens of the European Union and the United Kingdom as a cheap, reliable and affordable means to travel to Africa and beyond. Flights to South Africa have heavily contested flight routes, and usually, airlines compete for passengers by lowering fares.

Africa is the land of the untamed heart. Africa can be intense like a lion’s roar, majestic like an elephant, mysterious like a camouflaged chameleon and fun like a newborn baby hippo. Most of Africa is warm and sunny throughout the year making it an excellent continent to pick your next vacation. Africa has been a part of humanity since time immemorial. Africa is the cradle of life, and even though some humans tend to neglect their evolutionary beginnings, many animal species still are sheltered in its thick forests and forage in its vast savannas. Just looking at nature documentaries can make us look for travel deals to Africa.

There is a staggering variety of attractions and tourist destinations in Africa. Most avid travellers start their journey with the Pyramids of Giza and the Sphinx in Egypt. The Egyptian civilization and its ancient marvels still towers over metropolitan Cairo. Another fan favorite is the Egyptian city of Luxor, home to the ruins of the temple of Amun Ra. For even better holidays to Africa, one can go to Morocco to bask in the sun on the sandy beaches of Agadir. Or perhaps, engage in some star gazing and desert safaris at the Merzouga Dunes.

Going south to Namibia, the traveler will be overwhelmed to see the jet black fossilized trees rising out of the white salt plains that are encircled by the bright orange dunes of the Sossusvlei. Victoria Falls is the largest waterfall on earth and is located on the border of Zambia and Zimbabwe. The water of the Zambezi River falls 108 meters to the ground, with 12,800 cubic meters of water crashing and thundering every second on the rocks below. The great migration of the wildebeests and zebras in the Serengeti is a yearlong event. The herds move through Tanzania’s Ngorongoro Reserve in January and in June they appear in Kenya’s Masai Mara Reserve.

How long is the flight to Africa?

There are many direct as well as indirect flights to Africa from all major airports in the United Kingdom. Departing London Heathrow, the shortest non-stop flight to Africa is covered in 3 hours and 15 minutes. Manchester Airport also handles direct flights to at least six destinations in Africa and minimum flight duration is 4 hours.

What is the cheapest flight to Africa?

The cheapest flight to Africa is available for booking in as low as £92. However, you must brose destinations and check the updated flight prices at the time of your flight.

Which airlines fly to Africa?

Many airlines have their routes in Africa. Well, to name a few, British Airways, Emirates, Virgin Atlantic, Air France, KLM, Qatar Airways, Ethiopian Airlines, RwandAir, Kenya Airways and South African Airways are more in demand due to their frequent flight schedule from London.

What are the most popular destinations in Africa? 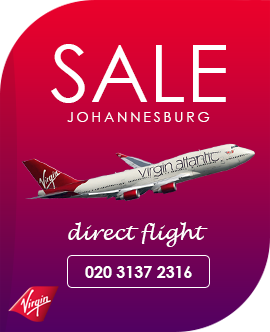 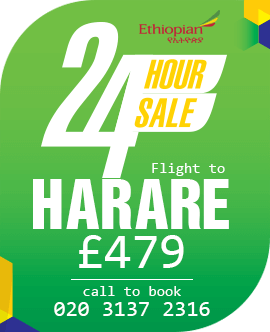 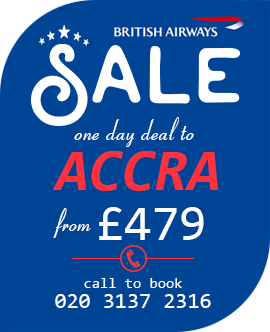 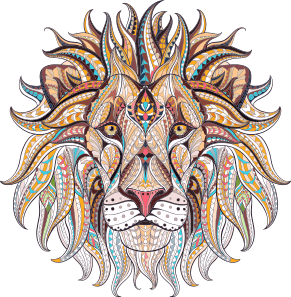 Most Visiting Countries in Africa 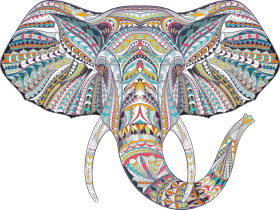 Get latest Travel deals for Africa

Our team of experienced travel agents are 24/7 at your service to help you.
SMS / Whatsapp
WHATSAPP
For reservation and booking
020 3137 2316
calls may be recorded for training and quality purposes