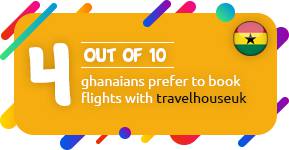 in search of flights to
Accra

Our experienced
Travel Agents
are here to help.

No need to spend any more time on tiresome and fruitless flight search, cheap flights to Accra are one click away with TravelHouseUK. There are flights options for all types of travelers whether it be travel enthusiasts or natives looking to get back to their loved ones and homeland. Accra waits for you and TravelHouseuk endeavors to help you on your way with special bargain deals.

Currently as many as 35 airlines to and fro Accra for almost 30 destinations with over 600 weekly international flights. Fly from any UK airport to Accra with any of the world class carriers such as British airways, KLM, Air France, SN Brussels, Lufthansa, Turkish Airlines and Alitalia. Let us construct the best itinerary for your preferred dates whether it is a matter of price or comfort. Simply send us an online query or call our agent for flight offers to Accra at bargain rates.

Which Airlines Are Operating Flights To Accra?

You can avail package holidays to Accra or let alone be the flights to Accra with British Airways, KLM, Emirates, TAP Portugal, Ethiopian Airlines, Royal Air Maroc, Lufthansa, Arik Air, Air France and Kenya Airways.  All of these flights can be availed from main UK airports such as London Heathrow, Glasgow, Aberdeen, Birmingham and Manchester.

How long is the flight from UK to Accra ?

Duration of flights usually depend what kind of flight you are choosing i.e. whether you are getting a connecting flight or a direct one. Minimum stopover is around 1 hour which can extend your flight timings. The shortest possible duration is around 7 hours with direct flights and longest is 30 hours. Here is average flight duration of most used airlines:

Which Airline Operates Direct Accra Flights From The UK?

Direct flights to Accra from London are only offered by British Airways from London Heathrow Airport. Rest of the airlines operates connecting flights from major UK airports. The most opted airlines by the UK passengers are Emirates Airlines, Royal Air Maroc, Ethiopian Airlines, Kenya Airways, Tap Portugal and Lufthansa. These can make stopovers at any Middle Eastern, European or African hub. Connecting flights are cheaper than direct flights. However, you have to wait on stopovers for reaching your destination.

Which Is The Cheapest Time Of Year To Fly To Accra?

The climate of Accra remains sunny and warm around the year. However, there are few months during which it receives considerable rain. Most UK visitors prefer to visit the city during Christmas and New Year holidays. This is peak season and finding cheap flights to Accra is very difficult. December is the most expensive time of the year. You have to book in advance for securing your tickets in peak season.

The rainy season starts in April and end in mid-July. It is off season as there are fewer crowds. If you want to save money, this time of year is best to explore the city. The most pleasant month of the year is August and there is a major drop in tourist influx. You can get great deals on tickets and accommodation.

When Is The Best Time To Visit Accra?

Generally, the weather of Accra is characterised by two main seasons, i.e. wet and dry. The tourist season is in full swing during November and lasts up to April. British travellers usually escape winters to cherish the warm temperatures in Accra. The city offers the best seaside vacation spot to the visitors.

The seasons in Accra are reversed, being in the southern hemisphere. So, as Europe freezes for the winter, Accra is enjoying the summer breeze and the golden sun by the beach in December. Celebrating the holidays and Christmas by the beach, in the warm sand, has its pleasures. Even though the beaches are going to a bit more crowded, the beaches of Accra are vast and the sunny, drowsy days are long. The average temperature zigzags between 27°C and 31°C throughout November till April, making itthe perfect time to get that light vacation tan. Besides, there is no rainfall during this time.

June and July is the peak rainy time of the year which makes navigation difficult through various roads of the city. The wet season is cheaper for travellers on a budget, but they might have to suffer slightly higher levels of humidity.

Those who like to save a few pounds would want to visit Accra in this season because most tourists head elsewhere during this time. With empty hotel rooms and unsold airline seats, the cost of living and travelling comes down as the demand decreases. All you then need is an umbrella that you would use when it rains for a few hours during the day. After the rain, Accra is all yours for the exploring. The air is a lot cleaner after a good shower making your cheap Accra experience a very great pleasure.

Which Is The Main International Airport In Accra?

Kotoka International Airport (KIA) is the main international airport servicing the city of Accra. It is one of the best airports in Accra which facilitates number of domestic as well as international flights. The city centre is situated at the distance of 6 miles only from the airport.

Are There Any Cheap Flights To Accra In April 2020?

Easter flight deals are made available to the public two to three months before Easter. Different airlines offer different flight packages and discounts. So yes, cheap flights to Accra in April 2020 are likely to be available. Keep yourself up to date by signing up for our weekly newsletter. Once offers hit the market, we will be the first to let you know.

What Is The Weekly Schedule Of Airlines Flying To Accra?

Following is the weekly schedule of different airlines offering flights from UK to Accra:

what is baggage allowance of different airlines for accra?

Many passengers tend to overlook baggage allowance. So, when they are on airport, they get frustrated with overweight baggage and its corresponding fee. To avoid this situation while you are travelling to Accra, please view the given below baggage allowance of well-reputed airlines tickets to Accra:

Other Airports near Accra

People who visit Accra also search for these destinations

Get latest Travel deals for Accra

Flights and flight-inclusive holidays on this website are financially protected by the ATOL scheme. However some are not and at time of booking you confirm what protection is applicable. This website is a part of Moresand Ltd (registration no. 02114691) T/A Travelhouseuk registered in England and wales . Office , 38 Riding House St, Fitzrovia, London W1W 7ES. All bookings protected under the ATOL scheme will receive an ATOL certificate. In cases where a part payment is made that flight booking is ATOL protected. In some cases a certificate does not indicate all the trip segments - this means the omitted parts are not ATOL protected). Please refer to our booking conditions for further information please visit www.atol.org.uk/ATOLCertificate
© Copyright 2020 Travelhouseuk. All Rights Reserved.
Search flights