Average flight prices for Kaduna
£ to £ 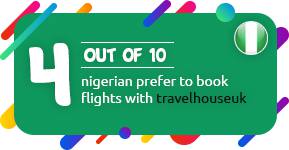 in search of flights to
Kaduna

Our experienced
Travel Agents
are here to help.

cheap flights to Kaduna, a city located in Nigerian mainland with a population of about 700,000 people, help tourists explore the raw side of the country. It is recognized as the transportation hub to agriculture regions in northern Nigeria and as one of the country’s major tourist destinations. Significant premises surrounding the city include remains of the 2500 years old Nok Civilization, the scenic Kagoro Hills, Kamuku National Park (known for hosting numerous species of mammals) and Queen Amina’s Kingdom. Cheap flight tickets for Kaduna are available at TravelhouseUK for travellers looking to enjoy a vacation in this traditional Nigerian city with Arik Air.

Which Airlines Operate Flights To Kaduna from the UK?

How long is the flight to Kaduna from the UK?

The flight duration depends on the airline you choose to fly with and the season. In the high season, the length of the flight can vary from 20 to 30 hours. Most international flights do not land in Kaduna; instead, they fly to Abuja or Lagos. Abuja is only 185 kilometres from Kaduna, which is a journey covered in about three hours by road. You can also take a domestic flight from Lagos to Kaduna via Arik Air – A local airline. For further information, please call our agents and let them know your plans to get the cheapest and quickest flight to Kaduna.

Are there any direct flights to Kaduna from the UK?

As of right now, there are no direct flights to Kaduna from the United Kingdom from any airport in the country. Passengers prefer to travel Lagos or Abuja on connecting flights before taking an aeroplane or a bus to Kaduna.

What is the cheapest time of year to fly to Kaduna?

The cheapest time to fly to Kaduna is from September to February. Particularly around Christmas the northwestern town in Nigeria lacks tourists. Going to Kaduna in the months mentioned above can provide the tourist an easier time paying for the air travel and accommodation expenses. It is better to level by the end of September because the humidity from the rains in July and August significantly decreases by that time, making your journey a pleasant one.

What are the major international airports in Kaduna?

The international airport serving Kaduna is named after the city. The Kaduna Airport (KAD) is located about twenty-two kilometres out of the city domains. Taking a taxi ride to the centre of the town from the airport takes around 25 minutes. Many international and domestic airlines chose to fly to Abuja, and most passengers then take a bus to Kaduna. The bus ride is two hours and 30 minutes long.

What is the best time to visit Kaduna?

Situated near the equator, the city of Kaduna has an equatorial sub-Saharan climate with average temperature rarely deflect outside the 25°C to 30°C range. The best time to visit Kaduna is from November to February as the weather remains mild and dry during these months. Despite these excellent weather conditions, this is also the slowest time of the year to visit the city, which means cheaper hotel rooms and airfares. The busiest time for tourists to come to Kaduna is from June and August when the Nigerians return to their home city in the summer break.

What are the major landmarks in Kaduna?

Kaduna is a Muslim majority city in a predominantly multicultural country. The town was established by the British in 1812 due to its proximity with the freight railway lines and the Kaduna River. The city grew to become the capital of the then North Nigerian region.

Which events and festivals are celebrated in Kaduna?

The Afan festival is an extension of the New Year’s celebration on the 1st of January, and it marks the beginning of the hunting season, with a great bonfire on a sacred hill. Having a majority Muslim population, Kaduna also celebrates the Eid ul Fitr and Eid ul Adha festival with a twist. On each Eid, after the prayers, a march of the horsemen takes place. This festival is called the Durbar festival, which mimics the decades-old tradition of showing loyalty to the local emir by gathering ‘soldiers on horses’ at the town centre. In November, the Kaduna Art Festival brings artists, musicians and performers on to one stage and allows them to spread the colours of culture.

What are the transportation options available to tourists within Kaduna?

The best way around town is to get a taxi. There are plenty of cabs in Kaduna, though are not in the most excellent shape, but can take the traveller around for a few Nairas. An alternative option is to hire a car from a few rent-a-car outlets open in the city centre. There are no significant public transport networks in Kaduna.

Which five-star hotels and accommodation are available for stay in Kaduna?

There are no five-star hotels in Kaduna. However, there are plenty of hotels in the city that are more economical and affordable for all. Please choose from the hotels below.

Other Airports near Kaduna

People who visit Kaduna also search for these destinations

Get latest Travel deals for Kaduna

Flights and flight-inclusive holidays on this website are financially protected by the ATOL scheme. However some are not and at time of booking you confirm what protection is applicable. This website is a part of Moresand Ltd (registration no. 02114691) T/A Travelhouseuk registered in England and wales . Office , 38 Riding House St, Fitzrovia, London W1W 7ES. All bookings protected under the ATOL scheme will receive an ATOL certificate. In cases where a part payment is made that flight booking is ATOL protected. In some cases a certificate does not indicate all the trip segments - this means the omitted parts are not ATOL protected). Please refer to our booking conditions for further information please visit www.atol.org.uk/ATOLCertificate
© Copyright 2020 Travelhouseuk. All Rights Reserved.
Search flights